Heritage Gas sponsored the marathon team relay at this year’s annual Blue Nose Marathon, held in Halifax May 16 to 17. The Blue Nose Marathon is the largest running event in Eastern Canada, which raises money in support of a variety of local charities.

Heritage Gas had 16 runners participate on two relay teams, as well as eight volunteers at a designated water station along the race route. The Heritage Gas race teams ran a full marathon of 42.2km and finished second and third out of 29 teams that participated in the team relay. 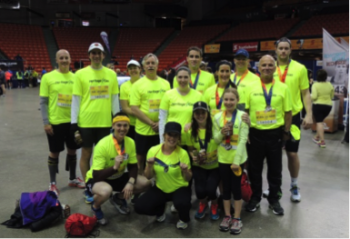