On February 25, AltaGas Utilities Inc. employees in Leduc, Alberta wore pink shirts and/or bow ties in support of Pink Shirt Day - a Canada-wide campaign to end bullying. The City of Leduc also supported this cause with a campaign titled “Tie one on”, which encourages local businesses to have their employees wear pink bow ties. The idea of Pink Shirt Day was conceived in 2007 by two high school students in Nova Scotia who saw a fellow student being bullied for wearing a pink shirt. They distributed pink shirts to fellow students, and they all wore them to demonstrate they would no longer ignore bullying at their school. The idea caught on, and in less than ten years the movement spread across Canada and around the world. 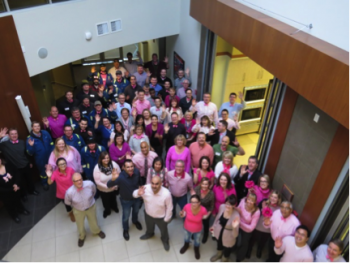