Engine 557 is Alaska’s last operating steam engine. It arrived in Alaska in December of 1944 - 15 years before statehood and had its last run on September 5, 1960 with a trip to the Alaska State Fair in Palmer. It was later sold to Monte Holm in Moses Lake, Washington in the mid-1960’s. Monte Holm purchased the engine "to make good a promise he made to those who kicked him off their trains while he was a hobo: that one day he would own his own railroad.”

Following Monte’s death in 2006, his estate donated Engine 557 to the Alaska Railroad. The engine arrived back in Alaska in 2011 and is now part of a privately funded restoration project.

ENSTAR participated in the restoration effort  by donating a 1981 Ford stake bed truck with a hydraulic lift gate. Patrick Durand, President of the Engine 557 Restoration Company said of the donation: "All have agreed that this vehicle [will] be an ideal support truck for Engine 557 both during the restoration process and when [the engine commences] operation in 2018. With the lift gate we can easily load heavy components on board the truck including our major support tools.” 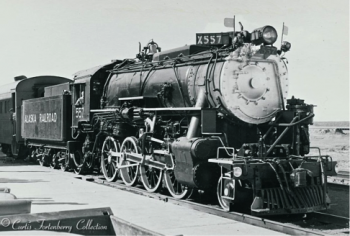